Have you ever seen the old French film called ‘The Red Balloon’? It was made in Paris a year before I was born and tells the tale of a young boy who is befriended by a red balloon. The balloon and the boy become inseparable and it follows him all over the streets of Paris. The film only lasts about 35 minutes and it has been my favorite movie ever since I first saw it as a young lad.

The film depicts both happiness and sadness in simple ways and even when a tragedy occurs, there is a wonderful sequence of hope being renewed at the end of the movie. As I write this devotion, I can still see the beautiful conclusion in my mind’s eye. I won’t give it away – you’ll have to watch the movie yourself and be pleasantly captivated by it.

Sometimes I think that our individual lives are movies that only God can see. He knows all of the things that we have done, the moments that have impacted us deeply, the joys we have experienced and the sadnesses that we still carry. There is nothing hidden from God, so He could be justified in separating Himself from us after death, but instead He wants to give us a beautiful conclusion where we become reunited and restored to Him forever. That’s why King David, in today’s highlighted verse, prayed to God to clean his heart and renew his spirit: he wanted that beautiful conclusion which only God’s grace and forgiveness could bring.

Perhaps you feel as though you’ve done something bad which will separate you from God. Maybe you have a deep regret about some deed that has put some distance between you and God. If so, then please know this – God can and will forgive you, just ask Him to do so, even now as you read this. As the apostle Paul once wrote long ago: ‘For I am convinced that neither death nor life, neither angels nor demons, neither the present nor the future, nor any powers, neither height nor depth, nor anything else in all creation, will be able to separate us from the love of God that is in Christ Jesus our Lord.’ – Romans 8:38-39.

Prayer: Lord God, create clean hearts within us and renew our spirits this day. In Jesus’ Name, we pray. Amen.

If you’ve never seen it, you can freely view the movie online at this link: The Red Balloon.

A Prayer for Today

1 Corinthians 2:6-7 We do, however, speak a message of wisdom among the mature, but not the wisdom of this age or of the rulers of this age, who are coming to nothing. No, we declare God’s wisdom, a mystery that has been hidden and that God destined for our glory before time began. (NIV)

O Loving Lord, speak to us wisely so that we know the path to choose, the words to say, and the deeds that need to be done. Embrace us as a people and help us to overcome our fears. Grant us the courage to stand against evil and live peaceably with one another. Allow Your Spirit of truth and righteousness to guide our decisions; permit us the sacred gift of discernment to know what is true, to reject all that is false, and to be humble servants of Jesus Christ. In His Holy Name, we earnestly pray. Amen.

Posted by Stushie at 9:54 AM No comments: 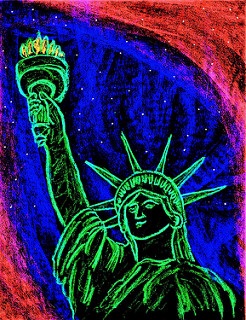 Proverbs 19:19 A hot-tempered person must pay the penalty; rescue them, and you will have to do it again. (NIV)

When I read this morning’s highlighted verse from the Book of Proverbs, I recognized the godly wisdom behind it. The words were written long ago, but could easily be applied in our present circumstances. Less than a week ago, all of our lives were turned upside down by the hot-tempered rage that was clearly evident in the riot that took place at the Capitol Building. Angry people lost control and tried to tear apart the heart of our democratic republic. It was a horrible scene of hostility and violence that appeared fearfully apocalyptic. It wounded us deeply as a free people and we are now living in the after-shock of that calamitous moment.

There are consequences for what took place and we need to be resolute in our efforts to ensure that we make the proper response. The Bible seriously cautions us that if we rescue those who have done this, then it will only happen again. Already, the FBI is telling us that armed protests may take place in every State Capital. If we excuse those who have caused this unrest and ignore their actions, we will be dealing with it for a long time and living under the fear that it may happen once more. One thing I learned the hard way as a child in elementary school – if you don’t stand up to bullies, they will continue to threaten you and make your life miserable.

As I wrote yesterday. I want us to reach a point where we can unify and find some middle ground. However, that does not mean we have to appease those who resort to violence and use strong-arm tactics to coerce us. In fact, we need to be brave enough to call them out and state the truth. If we make excuses for what happened and spread false ideas, we will never heal, or as the Bible put it, we will have to go through the same situation once again. In other words, if we do not learn from history, we will be doomed to repeat it.

Prayer: Lord God, You have given us solid wisdom from the Bible and in times like these, Your counsel shows us what we must do. Help us to apply Your words and grant us the courage to be resolute. In Your Holy Name. we humbly pray. Amen.

John Stuart is the pastor of Erin Presbyterian Church in Knoxville, Tennessee.

Looking for Something Else? Google Search will get you there...:)

Enjoy the devotion? Please Make a Donation or click on a sponsor link :)